Check out The Foally of Man, a podcast featuring Chris the Brony and Robert the non-Brony as they explore Fallout: Equestria chapter by chapter. Watch/listen on YouTube, Libsyn, Twitter, and PodBean.
Fedora71

Last Update:
Tuesday, July 24th, 2012
Favorited By:
Be the first to favorite this story!
Dark, Crossover, Adventure, Alternate Universe
Stable 77, the home of a Omega Pi, a lazy pony who relishes in driving ponies insane to some degree. The son of the Overmare and the only one who can become Overstallion. Its automatic as soon as the Stables council removes his mother and places him in charge. At least thats what he thinks until his mother tells him he has to pass a test, and not the written kind, he finds out all of his training and all the stuff his mom taught him about survival had purpose, he has to survive 3 months outside in the wasteland of the Hub. Its a difficult task, and one he thinks he's ready for until he gets mugged, and framed for murders that were horrific even by wasteland standards. Suddenly his challenge has become a gruelling trial. 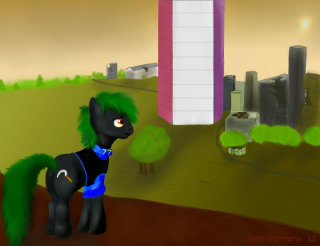