Check out The Foally of Man, a podcast featuring Chris the Brony and Robert the non-Brony as they explore Fallout: Equestria chapter by chapter. Watch/listen on YouTube, Libsyn, Twitter, and PodBean.
Megaskullmon

Added:
Saturday, February 25th, 2017
Last Update:
Friday, June 26th, 2020
Favorited By:
Be the first to favorite this story!
Crossover, Drama, Mystery, Sad, Thriller
My name is Smoke Pipe let's just say my mother wasn't a smart mare. I am known to many of old world as a private Detective. During that faithful morning. I was hunting a very old stallion that..I had been chasing for year's. Then the world started to burn he and I have been hunting each other for the past 200 year's. I wish to bring him to justice. But a odd Black Orb that looks like a memory orb was given to me..By a mare on the run..from some unsavory ponies. Known as the Black Aces. Welcome to a part of Equestira known as Wymarnic. A calm mountain part of Equestria. I walk the roads of this small part of Equestria that is mostly controlled by gangs..The lavender crew. The Black Aces, The chain boys, and the Black Stripes. I learn that this Orb holds the key to why Equestria's army fired on their own in this area of Equestria and why they refused to help us here. 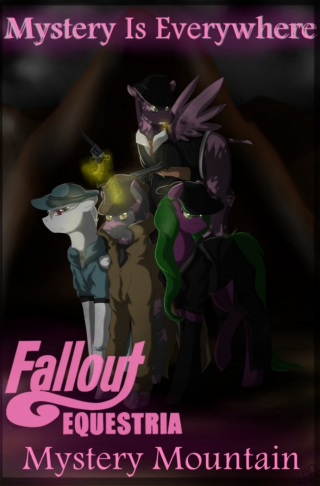