Check out The Foally of Man, a podcast featuring Chris the Brony and Robert the non-Brony as they explore Fallout: Equestria chapter by chapter. Watch/listen on YouTube, Libsyn, Twitter, and PodBean.
TheWanderingZebra

Added:
Saturday, February 25th, 2017
Last Update:
Wednesday, May 20th, 2020
Favorited By:
Be the first to favorite this story!
Adventure, Alternate Universe, Crossover, Dark
Equestria's a big place. Big enough for history to forget about the little wars that raged across every mile of the wasteland. Wedged between New Appleloosa and Fillydelphia, Pinewood Valley is always drenched in bandit blood as gangs vie for territory, wealth, and power. One bandit, a zebra named Phisa, has just been betrayed for the last time. She was close to the top, only for everything to come crashing down in a heartbeat. On the run and out for revenge, she must assemble her own rag-tag group of outcasts to fight back against her old allies and claim her place as the toughest, most feared bandit in the Pinewood. Cover art done by the fantastic [url=http://www.fimfiction.net/user/icekatze]icekatze[/url]! 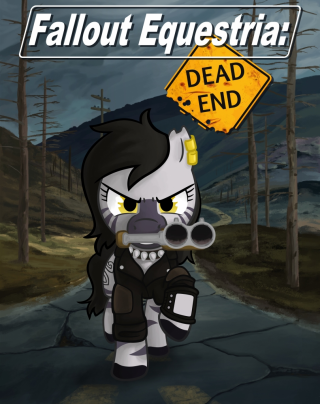