Check out The Foally of Man, a podcast featuring Chris the Brony and Robert the non-Brony as they explore Fallout: Equestria chapter by chapter. Watch/listen on YouTube, Libsyn, Twitter, and PodBean.
Kippershy

Last Update:
Friday, October 18th, 2019
Favorited By:
Be the first to favorite this story!
Dark, Crossover, Adventure
Two hundred years after the great war, a large, isolated settlement remains as a true beacon of civilisation in a dark world. With protection from both their location and internal agreements, Four Ridges remains one of the strongest groups in the wasteland. When their water talisman begins to break and their supply chain threatens to crumble, Crimson Wings, the son of the Overmare, steps up to the challenge of returning the prosperity and lifeline of his world. With time running short, he has a large task ahead of him. Friends, allies and foes will be made in his quest to save all who reside in Four Ridges, but it won't be an easy task and such items of desire do not come without cost. Choices will be made, bonds will be broken. Nothing shall be left quite the same again. Bullets aren't the only way to kill a pony. 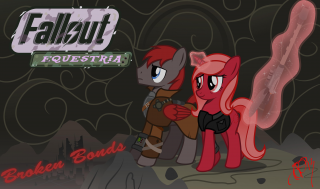 
[Show all media]
Credits for some of the awesome resources used on this site:
Icon Font is provided by [url=http://fortawesome.github.com/Font-Awesome]Font Awesome[/url] [url=http://twitter.github.com/bootstrap/]Bootstrap[/url] is used for layout. Littlepip, Homage, and Velvet Remedy censor images created by Astroty. Thank you! Developers, there is an API on this site, please don't abuse it too much...
My Little Pony: Friendship is Magic is © Hasbro
Fallout and related games are © Bethesda Softworks
Fallout: Equestria is © Kkat
All other items are © their respective owners.