Check out The Foally of Man, a podcast featuring Chris the Brony and Robert the non-Brony as they explore Fallout: Equestria chapter by chapter. Watch/listen on YouTube, Libsyn, Twitter, and PodBean.
Brony-Commentator

Added:
Monday, August 3rd, 2015
Last Update:
Friday, April 1st, 2016
Favorited By:
Be the first to favorite this story!
Tragedy, Dark, Crossover, Adventure
[i]War. War never changes. The last war in Equestria, was meant to be that one particular war that would ultimately annihilate all existence and life. Instead however, it only lead it to a state of bleeding and decomposing. Those few Ponies who were fortunate, or cursed enough to survive the war by means of submitting to its diseases, would only live through it so that they can witness other Pony survivors finish the job that the Bombs started. Ignorant, or unaware of how close Ponykind is to extinction, most of the Pony population today is comprised of madness, greed, and even simple hunger, but above all, evil. Raiders, Merceneries, Mutants, Monsters. Things that had no place in the once peaceful land that was called Equestria. However, against all new rules of survival, those who lived through the Apocalypse, had carried along with them what they thought mattered. They carried memories, of the world that they have seen destroyed. Some losing fiath completely, have burried those memories and sucommed to the horrors of the new world. Some were crazy enough to have tried to turn those memories into realities. But most "Lucky survivors" have simply spread those memories in hopes that true Hero's of the Wasteland would carry those memories into the darkness, and light up hope. But the Equestrian Wasteland, has its price of being magical once again. Those who wish to bring back harmony and peace to it, are tested. They are tested on how far they are willing to go, in order to achieve their missions. On how much they are willing to sacrifice. There is always a cost. The cost for some Hero's, is often how they'd preffer to act like Hero's. Even Hero's must kill. And even Hero's must act in ways that would not make them look like Hero's.[/i] While true Hero's do what they can to make the Equestrian Wasteland a better place, few of them try to be as merciful and good-hearted as our young Protagonist Gideon, a slave with a thirst for vengeance ONLY for those who have kept him in the life of chains. And even fewer of them fight fire with fire the same way his companion, the so-called 'Trotting Dead Killer' does. When Gideon's passion to be a savior will lead him and his friend through the nightmares of the Wasteland, his anti-heroic Ghoulish friend will almost obsesively try to push him into just one rule: "Survival, no matter the cost, and morality and pride be damned". Is the Wasteland really as cruel and hopeless as the Ghoul Pony believes? Having witnessed the Wasteland actually hapenning? Or is true Equestria still possible to be reborn like Gideon believes? Does the magic of Harmony still exist? The difficult Friendship between them and their companions will influence each ones opinion on the matter as they'll try to both survive and make differences in their adventures. Adventures to places that will be highly based on the Fallout DLC's [i]The Pitt[/i], [i]Operation: Anchorage[/i] and [i]Point Lookout[/i]. 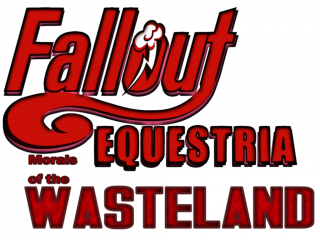